Review of "The Last Hybrid: Bloodline of Angels" by Lee Wilson 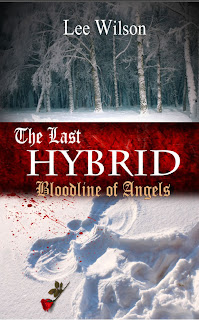 From the Publisher: When Hannah Sawyer dropped out of college after losing her scholarship she spent five years weaning herself of alpha males and alcohol, but when she decides to return to finish her degree she finds those things rolled into one in the intoxicating blue eyes of fellow student Daniel Keith.

What she soon learns is that her newfound addiction to Daniel impairs her judgment beyond any mixed drink a frat boy could have handed her. She should have left when he cut his arm with a car key to show her his white blood. Or when he had a run-in with a dark angel on one of their dates. But Hannah stays, entranced by this man who remains a mystery to her.

Who or what is Daniel? And why does the small town of Spring Hill, Tennessee seem to summon his enemies? As romance lures Hannah further into a shadowy world most people never see, she realizes she's gotten herself in deeper than she knew possible. And this time there's no option of dropping out.

My Review of The Last Hybrid: Bloodline of Angels: Hannah returns to college after a few years off and now she's determined to finish her degree. She will concentrate and stay away from boys, or should I say, men. But her plans are shot when she meets Daniel, a fellow student who has an amazing knack for being in the right place at the right time to save lives. She soon discovers there's a lot to this life that she wasn't aware of and her real education might just be Daniel leading her to an unseen world most people never see. Daniel is a good guy. But there seems to be a dark side to him as well. Is he a nephilim? A vampire? Does Hannah get her degree? You'll have to read to find out.

First let me say that this book rocked my world! I've read it three times and each time I found new, seemingly unexplored nooks and crannies.

At the risk of sounding pretentious, I believe this book, in many ways, is ahead of its time. The author doesn't "spoon feed" the characters to us and there aren't many scenarios that are neatly packaged with a bow on top in this, the first book of a series. There is still a lot of mystery surrounding the main characters even at the book's end. As in real life, you don't get to know the characters immediately. It takes some time and effort (again, as it is in real life). The author doesn't feel the need to explain himself or to tell us what the characters are thinking or feeling during every event. And that's one of the things I loved about this book!

The concept of "showing and not telling" in writing and film isn't new. Books of the past would do the opposite by often speaking directly to the reader. Some would even say things like, "You, dear reader, don't know that Bob's wife spends her nights with so and so" or, as in the case of "Alice in Wonderland," the author actually asks the reader questions such as one example where the reader is asked if he/she could, like Alice, practice curtsying while falling down a rabbit hole. But today that is considered passe and amateurish because it breaks the "suspension of disbelief." Most authors avoid that like the plague. But Lee Wilson seems to take it to another level in many ways and seems to be a natural in the pack of new-breed authors who allow us to see what's happening but don't translate or interpret a lot of it for us. We are often left to determine what we may and see how things end up. Though the book is fast-paced and smoothly written, the characters slowly reveal themselves in their actions and reactions, but, then again, sometimes they don't - at least not right away. That can be aggravating for readers/reviewers who expect a nice, neat and cheap sugar rush of immediately knowing the characters they're reading about. But an emerging group of us are really digging the process of getting to know characters over time, all the while making the occasional guess or being confused by a character's actions every now and then a la real life. ::gasp::

The foreshadowing in this book is exceptionally strong but, after speaking with a few other readers, might be lost on some folks. It (the foreshadowing) is often subtle and the author doesn't ram it down our throats. Again, it's as though we're a "fly on the wall" to what's happening and not put in the position of mind reader. Some people can't handle it and might become too anxious. A few reviewers complained about not knowing the characters that well. But, again, in real life we don't discover everything about the people we meet in a few weeks or months (or even years). When it's natural, it takes time and happens bit by bit. In some ways The Last Hybrid makes some other books I've read recently seem artificial as though the authors were forcing trivia into a story and that's just not natural. So keep that in mind as you read. Like all of us, the characters aren't predictable. And I'd even call a couple of them in this book conflicted in how they respond to the events of this story. So in many ways, we're seeing a lot of ourselves in these characters in that sometimes they don't make sense.

All of this adds a baseline of wonderful and dark mystery to this book. It's a building of intensity as the layers are slowly peeled back. But if you're content with always being told what characters are thinking and feeling and don't want to venture into a different writing style that allows you to decide for yourself on some things, maybe this isn't the book for you. Because in some ways, you might have to alter your reading style. For me, it was a terrific experience and I absolutely can't wait for book two. I was told that the first three chapters of book two will be released for free in a relatively short period of time. You can sign up for that here.

I rate this book at:

Buy it at Amazon.com, BarnesAndNoble.com, BooksAmillion.com.