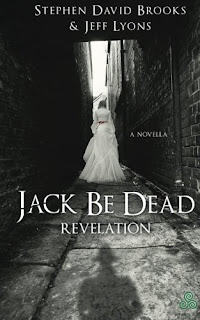 From the Publisher: Book 1 of the Jack Be Dead series London—Today— “Jacks” are being killed across the city by a female serial killer with an almost supernatural ability to stay hidden. When Jack Tate, an emotionally bleak Detective Sergeant, is called in to investigate the brutal killings, he teams with Mae, an intellectual wannabe-detective, and Albert, Mae’s pack-rat psychic father, to unravel the killer’s taunting clues, until the devastating truths behind the killings force Jack into a dark revelation that is centuries old and bathed in blood. Karma is a bitch, and then you die—if you’re lucky.

My Review: If you have any kind of dark side then Jack the Ripper has surely been on your radar at one point or another. I know he has mine. It's pretty fascinating to try and get in the mind of such a horrific serial killer and wonder what he was thinking to lead him to do such awful acts. Why did he slice up the body? Why did he mutilate? Why...?

In Jack Be Dead, Brooks and Lyons have captured the essence of the original Jack and channeled him into a more modern day Jack, with one detective on the hunt for him before he can strike again. That detective is Detective Sergeant Jack Tate. He's a bit of a mystery himself, with a past that hasn't quite come to full light in this book but hopefully will in the next two in this series. He's on the hunt for what he believes is a man, but his "partner", Mae, is convinced it's a woman they are seeking. The two may see differently on the sex of their killer, but one thing is for sure: whoever is behind this is as skilled as a surgeon and knows their way around with a blade.

If you have an itch for mystery, then this is one great book. I was hooked from the first page, and cannot wait for the second one to come out. Brooks and Lyons have done a great job with recreating Jack-type murders and giving the reader the feel of the hunt.