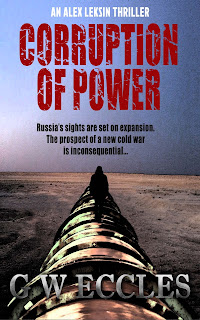 From the Publisher: Independent troubleshooter, Alex Leksin, is recruited by Prime Minister Saidov when the plan to reduce Russia’s reliance on an ever more hostile Europe is put at risk. Hell bent on expansion, President Karpev’s strategy is first to shift the markets for his country’s vast energy resources to the East and Saidov has been charged with overseeing a planned pipeline for Russia’s oil through Turkmenistan and Afghanistan to access these markets. Failure could mean catastrophe, spreading the conflict raging in the Middle East to Russia’s own borders.

Fearful that the pipeline deal might be tilting off course, Leksin has only twelve days to report back before Karpev is due to sign the pipeline contract with the Turkmen President in Ashgabat.

His investigation begins in Moscow at the conglomerate responsible for planning and funding the pipeline. Once the province of larger-than-life oligarch, Lev Usenko, the group is now run by his daughter, Vika, the woman Leksin was once to marry. Trickier still is the prospect of dealing with her embittered brother, Max.

Against a background of political corruption, state-sponsored terrorism and increased Taliban insurgency, Leksin moves on to Turkmenistan, one of the world's most sinister countries, right at the heart of Central Asia. Initially his enquiries reveal nothing to cause alarm. Other factors, though, suggest otherwise: wherever Leksin goes, someone tries to kill him; people in a position to help him are assassinated; and information turns out to be misinformation.

And when at last he discovers the truth, he finds himself unsure of whom he can trust as the stakes get frighteningly higher.

Now, to whet your appetite, here is an excerpt from the book:

Inured by hard experience as Anna Politska (the investigative reporter at Novy Novoski) was, she'd wept when the shock news of the mass murder of children and teachers at School No 86 in Pechatniki had broken two days earlier. She'd covered many atrocities, but the day when a massacre of innocents no longer moved her, she'd give up. As a journalist, she had a part to play. Blinking back the tears, she'd assimilated the scene. The banner hastily erected across the front of the school had registered with her immediately. Islamic Democratic Freedom Movement, it had read. Subsequently she'd listened intently as an FSB spokesman confirmed the IDFM's responsibility.

The IDFM was a Chechen group, and as a journalist during the Chechnya war, Politska had established links with its leader. The group were certainly no saints, but the mass murder of children was not their style either. Something smelt wrong. Using her contacts, Politska had succeeded yesterday in talking to the group's leader, who'd vehemently denied any involvement with the school bombing. It's all a set-up, he'd told her, and she believed him.

Her next move had been to arrange a meeting with her FSB informant. A reliable source - at a price - in the past, on this occasion he'd refused point-blank to discuss the subject.

"You're walking on quicksand, Anya," he'd warned. "Let this one drop."

"I can't, you know better than that," she'd replied. She'd experienced more than her fair share of threats and intimidation over the years - beatings, poisoning, electric shocks, days of confinement in a pit, even a mock execution. But these were the occupational hazards of investigative journalism in Karpev's Russia, and if you weren't prepared to risk them, then you needed to change your job.

When she'd got back to the office, though, she'd felt despondent. All she had was the denial of the IDFM's leader, but on its own this meant nothing. No one would believe him without independent evidence supporting his claim, yet she was running out of leads. Then, this morning, everything had changed.

When she'd arrived in the office, she'd found an email sent to her anonymously overnight. Nothing in the body of the text, just an attachment and a heading 'Look at the date'. Opening the attachment, she'd found a draft press release on FSB-headed paper describing the terrorist attack on the school. As she'd started to read through, she'd felt her professional instincts take hold.

The press release summarised an incident at School No 86 in Pechatniki. It detailed how terrorists had taken over the building during school hours, rigged it with explosives and held children and teachers captive. But in this version there was no actual explosion, no death toll, and the terrorists had escaped. Politska scrolled up and down the text, confused. Suddenly her eyes fixed on the top line - the draft press release was dated the day before the actual incident occurred.

She swiveled in her chair to stare out of the window as the implications fell into place. The school bombing, as she'd suspected from the outset, was no straightforward terrorist incident. Now she had solid evidence that the FSB had themselves been responsible. The appalling consequences might not have been their intended outcome, but they had always been a possibility. As her father used to say, if you play with fire, there's always a chance you'll get burned.

Of course, she acknowledged, this was not the first time the FSB had stage-managed terrorist incidents. All the evidence pointed to the apartment bombings in 1999 being perpetrated by the FSB in order to legitimise the subsequent invasion of Chechnya and the assumption of power by one of its own. Almost simultaneously, an unexploded bomb had been found and defused in Ryazan, and subsequent police investigations identified the three men responsible as FSB agents. Even these were not isolated examples: it was now clear that the FSB were complicit in bomb explosions in the marketplace in the southern Russian city of Astrakhan in 2001, at the bus stops in Voronezh in 2004 and on the Moscow-Grozny train in 2005. And, as Politska herself knew well, during the Chechnya conflicts, the FSB organised numerous kidnappings of journalists and foreign NGO workers, pretending to be Chechen terrorists, in order to build up international support for the Russian invasion.

Nonetheless the mass murder of children . . . well, that was in another league altogether. She'd got President Karpev now.

George Eccles, writing as G W Eccles, graduated from the London School of Economics with a law degree and subsequently became a partner in one of the major international financial advisory firms.

In 1994, George left to move to and Central Asia during the tumultuous period that followed the breakup of the . His work involved extensive travel throughout , , and - often to places with restricted access to foreigners. During his time there, he advised a number of real-life oligarchs how best to take advantage of the opportunities that became available as regulation crumbled and government became increasingly corrupt. Against this background, while his novels are fiction, many of the anecdotes and scenes are inspired by actual events.

His first thriller: The Oligarch, was awarded a Silver Medal both at the Global E-book Awards 2013 and at the Independent Publishers Book Awards 2013, as well as being selected as IPPY Book of the Day.

George is married and now lives with his wife in a hilltop village not far from in the South of France.

Corruption of Power on Amazon: http://www.amazon.co.uk/Corruption-Power-G-W-Eccles-ebook/dp/B018XXLKAE